Fundraisers pull in £13,500 for hospice in memory of late Wolverhampton MP

Brendon Turner and his supportive pals gathered the cash pot for Compton Care after braving the gruelling challenge in memory of his late father Lord Bilston Dennis Turner.

The Wolverhampton-based charity's nurse specialist Debbie Smith and marketing manager Grace Lee were transported on the back of a tandem, on a stretcher and in a canoe during the 25.5-hour fundraiser.

More than 100 patients supported by the Compton Road West hospice will now be visited in their homes by nursing staff thanks to the money.

Ms Lee said: "This is a truly incredible amount which will change the lives of so many local people. This amount will fund the equivalent of 119 patients receiving personal care and support in their own homes.

"We simply would not exist were it not for groups of people like this who choose to give up their time and their money to ensure that local people who are living with incurable conditions are able to access the care and support they need and deserve.”

It was the third time Mr Turner raised cash in honour of his father, who was cared for by the hospice after his cancer diagnosis in 2014.

Ms Lee added: "Since starting their fundraising journey in 2014 the dedicated group have raised over £77,000 for Compton.

“We cannot thank the challenge team enough for what they have done for our Compton."

Fundraisers cycled from Swansea carrying the Compton Care staff in a trailer attached to the back of a tandem in July.

An eight-mile hike followed, which saw the pair carried on a stretcher, on the tandem, and then in the back of a canoe down the River Wye.

Fundraisers then got back on their bicycles as they pedalled from Hay-on-Wye, Wales, to Wolverhampton as part of the challenge dubbed ‘The Lord Bilston Big Challenge: Carry the Load’ in July.

Nigel Hastilow: This is serious – but it’s not the end of the world

Star comment: Not too early to start thinking about end of coronavirus crisis

Call grows for prisoners in England and Wales to be released

Openreach: Broadband traffic up significantly but previous record not broken Scottish breweries fear lockdown could be ‘disastrous’ for industry

What the papers say – March 31 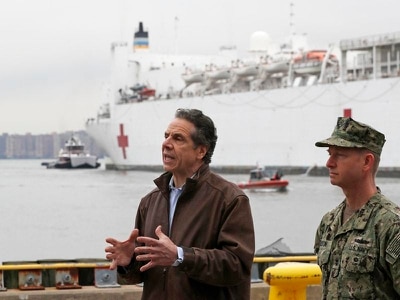